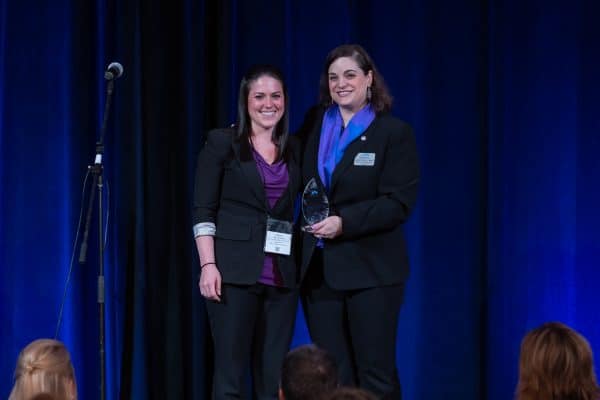 The recipient of the inaugural President’s Award is Ashlee N. Skarzenski, MSN, BA, RN, CPAN, CEN, NE-BC. Ashley took over the management of her PACU in April of 2017. At the time, only 41% of the eligible nurses in her unit were certified. Recognizing the importance and value of certification, she quickly formulated a plan to increase the number of certified nurses to 100%. She developed a pay-ahead program through the hospital and met with each of her staff members to discuss their career growth. She encouraged anyone eligible to sit for the CPAN exam to take the exam and provided them with the testing deadlines.

That summer she purchased CPAN study materials for everyone to use. She also began studying so that she herself could become certified. Ashley let the staff know about her intention, which further motivated some of them to take the test with her. In the fall of that year, she passed CPAN exam, along with five of the PACU staff members.

Ashley then purchased CPAN badge clips. So when a nurse became CPAN certified, she gave them a handwritten thank you card with a badge clip. Additionally, at the end of the testing period, they would have unit celebrations with cake for the new CPAN nurses. In the spring of 2018, Ashley’s unit was awarded the ABPANC 75% Certification Achievement Award. At that time, there were still six more nurses who needed to become certified so that her unit could reach that 100% goal.

Ashley motivated the nurses who were certified to share study materials and to provide encouragement to the final six. After much anticipation (and hard work), her unit learned that all six had passed, reaching that goal of 100% certification.